Dr Salina Banu, now Chief Scientific Officer for the Bangladesh Agricultural Research Institute completed studies at the University of Sydney in 1997 as a single mother of two children, setting her path of helping her country and other women.

Not only did Dr Salina Banu successfully complete a Masters of Science studying plant pathology at the University of Sydney in 1997, coping with learning English, her research work and new customs. She did it as a single mother caring for two young children aged 18 months and six years at the time.

Dr Banu said that getting child care for her children was the single most difficult thing she faced.  The support of colleagues and friends who often babysat her children allowed her to study.

“They made my life easier with two small children. They arranged child care centres, pre- and after-school care and even transport to drop my children home,” she said.

Dr Banu said that her children became her spokespersons, especially in the market and public places, as they were able to learn Australian English very well and understood all the Australian slang.

The recipient of an Australia Awards scholarship funded by the former AusAID, she enjoyed the cultural diversity of living in Sydney. When she walked around the University of Sydney campus and the city, she saw a vibrant mix of races and cultures.

“All of those people had different perspectives that made my time exciting and special, especially the greeting ‘G’day! How can I help you'” she said.

“I was hoping to develop my knowledge and research skills into modern agricultural practices, which could contribute to sustainable food security in Bangladesh,” she said.

Dr Banu has since undertaken significant research into mapping resistant genes in rice to protect the crop from brown spot disease (Bipolaris oryzae), and contributed to the production of fungicide-free healthy seedlings and the release of new wheat varieties in Bangladesh.

Dr Banu was presented with the Australian Alumni Excellence Award in 2014 for her work on the first two projects, and a Gold Medal award for her work on healthy seedling development. This award helped open the doors of the international science community for her.

She is also a Fellow of the Bangladesh Academy of Agriculture.

“It is my pride that Bangladesh, a country of persistent food deficiency, has now attained self-sufficiency. As an agricultural scientist, my work is to ensure food security in Bangladesh through sustained agriculture, and I am proud to say that we have made a breakthrough in food production in Bangladesh, which I have been a part of.”

Dr Banu now works as the Chief Scientific Officer for the Bangladesh Agricultural Research Institute, under the Ministry of Agriculture, and puts her energies both into further research and to contributing to the role of women in society.

She believes that her Australian scholarship experience inspired her commitment to empowering the women of her home country. 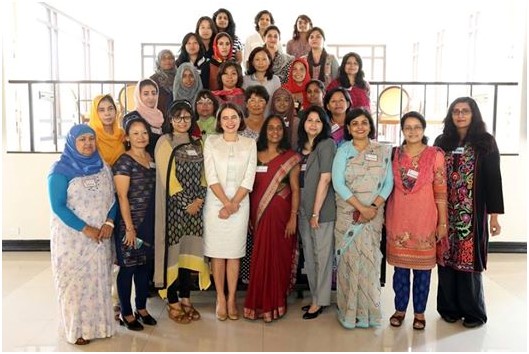 Dr Banu demonstrates her ongoing commitment to Bangladesh women’s development in a number of roles, including supporting literacy for economically-disadvantaged women and girls in squatter settlements. She heads the Working Group for Professional Organisation for Women in Extension and Research (POWER) in Bangladesh.

She is also an active member of Women in Leadership Network (WiLN), a vehicle for Australia Awards South and West Asia Women Alumni to create links among women leaders in the region; and Australia Awards Alumni Association Bangladesh.

She said that respect for women – especially as a mother with small children – was the best thing she experienced in Australia.

“I was fortunate enough to get a lot of support from my neighbours in Australia, AusAID people, and especially my supervisor who even babysat my kids. My kids have gotten the exposure to realise their own potential. Now, they are successful in their education and career with good moral values they learnt during their time in Australia,” she said.

She also said that she only encountered two incidents of racism in Australia, which was her worst experience. “However, I’m glad they were isolated incidents and most Australians I met were warm, accepting and kind.”

“I still remember my neighbour, an older woman who would wait every morning to greet my kids and give them chocolates,” she said.

She said that the open-mindedness, tolerance, and acceptance of Australians that she encountered gave her the strength to raise her two young children as a single parent in a new country after her husband died.

“I sincerely thank my supervisor, the late Professor Brian Deverall, for his excellent guidance and support. He was my mentor until his last breath. He passed away on 9 August 2014. My Professor will be an on-going inspiration throughout my professional career.”