To mark Australia Day on 26 January, the Australia Alumni Association Bangladesh (AAAB) distributed blankets and warm clothes to the underprivileged street dwellers around the Dhaka metropolitan area on 28 January 2014. The association has collected contributions for the initiative from its members and others. The Honorable Australian High Commissioner, Mr Greg Wilcock, handed over a Cheque of BDT 50,000 (fifty thousand) as a matching fund to the initiative on 22 January 2014. Mr Muhammad Saidur Rahman, chair of the (AAAB) Ad Hoc Committee, accepted it on behalf of the association. 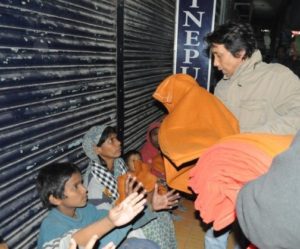 Distributing blankets and warm clothes to the underprivileged around Dhaka

A total of 418 blankets were purchased, with the fund generated by (AAAB) and that donated by DFAT, and distributed in different parts of the Dhaka Metropolitan City, along with in kind contribution collected by the Association’s members. The blanket distribution was adeptly facilitated by Bangladesh Disaster Preparedness Center (BDPC) and supported by the Australia Awards Office in Bangladesh.  Mr Michael Sadlon, former Regional Coordinator of Australia Awards – South and West Asia and Mr Muhammad Saidur Rahman, Chair of (AAAB) Ad Hoc committee inaugurated the blanket distribution at 9:00 pm in Gulshan 1 DCC Market by distributing blankets to the street dwellers. Prior to the blanket distribution, the Ad Hoc Committee chair split the 16 volunteers in 5 groups concentrating on 5 different geographic locations and briefed the comprehensive rollout plan of distribution including security protocol. These five groups were allocated the following locations of Dhaka City respectively as most of the street dwellers are generally found around these areas: 1) Sadar Ghat, 2) High Court/National Stadium, 3) Mirpur Mazar, 4) Azimpur graveyard/Dhaka University and 5) Karwan Bazar/Kamalapur Rail station. 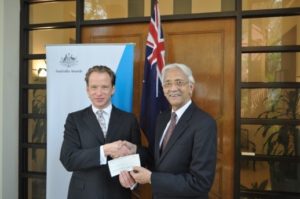 As per the plan, group 2 members (Michael Sadlon, Mobarak Hossain Sajid, Kanchan Khisa and Khaled Miah) distributed about 80 blankets to the poor, needy street dwellers in Old High Court and Stadium area when people were at sleep. The team members carefully identified the appropriate beneficiaries on the spot for handing over the clothes, as there were too many people to distribute only a limited number of blankets. Elderly women and men, children, and those who did not have a blanket or similar cloths were given priority for distributing the blankets.